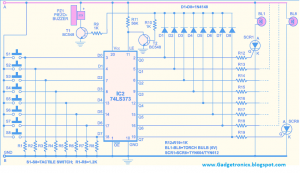 Quiz buzzer circuits have been available numerous in number yet we face many problems in most of the circuits and some cost much. Here is a perfect and cost effective electronic circuit which can be used for quiz in schools and colleges.This circuit works with special IC known as IC 74LS373, switches, Piezo buzzer and bulbs for the indication.The switches are given to each participating competitors and the respective bulbs can be placed before them to determine which team pressed the switch first. Lets look into the working of this quiz buzzer circuit.

IC 74LS373 forms the main heart of this circuit and it was a transparent latch which consists of a eight latches with three state outputs. This IC takes eight inputs enabling eight teams to play with it.The brief working explanation of the IC was given in this article Working of IC 74LS373. The circuit was powered with 5V power supply and as you can see that the switches were connected directly to the power supply so when the switch is not pressed it gives low signal to the input pins (D0-D7).

SCR(Silicon Controlled rectifier) was connected to the output pins of the IC and along with it diodes are also connected. SCR was used here in order to switch  ON the bulbs which require considerably large amount of power. And diodes was used to allow the forward flow of current from the output pins of the IC and thereby switching the transistor ON and thus perform the Latching operation.

Quiz buzzer circuit can be initialized by switching ON the power supply and once it was ON the quiz buzzer will be ready to use.When any of the input switches from (S1-S8) was pressed, then the respective output pins will go high this induce the transistor to switch ON and then the  LE pin was pulled to low state.This low state in the LE pin enables the latch of the IC thereby providing continuous high signal in the output pin. In this point of time the IC will not respond to any of the input signal given by any other switches to it. And the high output signal further switches the SCR on and thereby the respective bulb of the team will glow and also the transistor T1 connected to the Buzzer will switch the buzzer ON. Since the output was latched with the input this circuit eliminate the confusion among the participants and also it provides room for eight teams to play at a time.

This Buzzer circuit can be reset by switching the power supply OFF and turning it ON again. So this quiz buzzer circuit was cost effective and efficient comparing to other circuits. It will be a great mini project to do at you home and i bet you will like it.

this circuit does not work in Proteus software plz me urgent

What problem you are facing? I mean which part of circuit is troubling you?