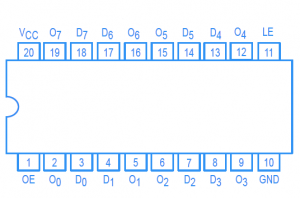 The IC 74LS373 is a transparent latch consists of a eight latches with three state outputs for bus organized systems applications.It is a 20 pin IC comprises of eight input data lines (D0-D7) and eight output lines (O0-O7). The OE pin was meant for Output enable and LE pin for Latch enable.And the rest two pins VCC for power supply and GND for Ground. Let’s move in to the working of latch IC 74LS373.

The IC 74LS373 comprises eight D flip flops through which the input was given to the each pins of the IC.The Flip flops data changes asynchronously when the Latch enable (LE) is in High state.As we all know the operation of flip flop that any input to the D pin at the present state will be given as output in next clock cycle.But when the Latch Enable Pin was pulled low, the data will be latched so that the data appears instantaneously providing a Latching action.

The Output Enable pin also plays an important role in the working of this 74LS373 IC.When the (OE) pin is low input data will appear in the output.But when the OE is high the output will be in a high impedance state.This IC operates with maximum of 5 V and widely used in many kinds of electronic appliances.

I’m using a ‘373 as an output port for a very simple Z80 computer I’m building. I have 5V on D, but only get 3.5V on Q after latching. OE is held tied to ground. Do I need pull up resistors or does this sound like bad chips. I swapped out the chip for another ‘373 I had laying around and it did the same thing.
Thanks,
Tim

Its certainly not a bad chip problem, I’ve checked the datasheet of this and found out that the typical high level output voltage is 3.3 V . Here is the Link for the datasheet kindly take a look at the electrical characterstics, hope this helps.