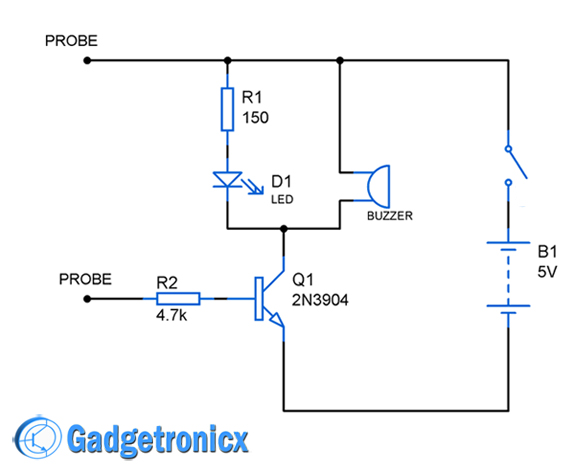 Testing the continuity of a circuit is an essential step when comes to debugging hardware. Hardware debugging can be a real pain when we are not equipped with proper tools and devices to handle it. This Continuity tester circuit will provide a cheap and efficient solution for the debugging problems. The above circuit is capable of checking the connectivity that is electrical conduction path between two points.

This circuit uses a Red LED and a buzzer to indicate there is a electrical path established between two points. The entire circuit can be powered by a simple 5 volt battery. A simple NPN transistor 2N3904 forms the base of this above circuit. This transistor was used as a switch to both the LED and buzzer connected to it.

When probes are placed between two points where there is an internal connection that is an electrical path for current flow the transistor will be turned on. This will activate the LED and Buzzer which will act as an indication for continuity between the points to the user. Cost, size and easy usage are the main advantages of this circuit.

I built this, but without a buzzer, only an LED. Tested on a bare wire, 10k and 100k resistor. The led lights up every time. Even across an led the led lights up.

Try adding a pull down resistor of 10k from base of transistor to ground.

What’s with the switch near battery? What does it do???

Dejan,
That’s a simple switch to turn ON/OFF the circuit