A simple IR led and Photodiode used for emitting and sensing the IR beam. And Op Amp IC 741 is used as an comparator which in turn switches the output level as either logic 1 or logic 0. The Variable resistor RV1 used to tune the sensitivity of the detector by altering the reference voltage to the comparator. And at last LED D3 was meant as an indicator in case a IR beam is detected or reflected.

When the circuit is powered IR LED D1 emits Infra red beam. The photodiode D2 was connected in a reverse biased manner along with a resistor R2 in series. When there is no IR beam incident in the photodiode no current passes through it which in turn leads to no drop in voltage and inverting terminal of the Op Amp is fed with max voltage that is 5V. Since the voltage in the inverting terminal is more than the reference voltage at the “+” terminal of op amp the output stays LOW or logic 0.

When IR beam is reflected by any body which makes the beam to incident on Photo diode, current passes through it and in turn a drop of voltage occurs between the terminals. Now the reference voltage at the + terminal of Op amp is more than the – terminal. The output of Op amp switches to high or Logic 1 state.

This module will be highly useful to interface with Microcontroller for sensing since it provides the output in two logic levels which is compatible many microcontrollers. 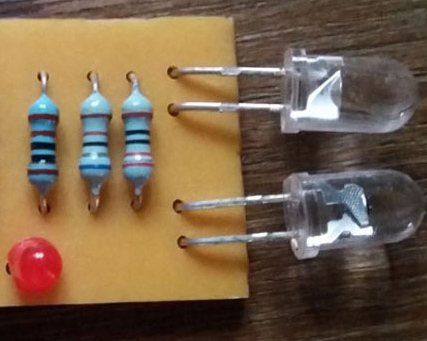 IR LED and Photodiode must be placed as shown above

I think when Jason asked “What was it’s purpose in the original module?”, he referred on the transistor. I am also curious regarding that, but hopefully the circuit works with or without it as well.

Got what you mean to ask. You don’t need to worry about transistor. I have basically included the image for demonstration. Will update the article to avoid further confusion.

easy understanding and compact design. i am new to this feild. wherther any body got the out put from this.

Sorry i was new in electronics, but can you help me ? what is the name of the blue component is located under ic on the picture.
Thanks Before

On the picture there appears to be a Transistor but on the schematics it is not shown? Also no mention of it in the workings.

It’s the picture of module i had, i felt it was not really necessary when you want to make one. So omitted in the schematic design.

Ah thanks for that information as I thought i was going mad for a minute.
Nice neat module.

Sorry, i should have mentioned it in the article my bad.

What was it’s purpose in the original module?