IR proximity sensor is generally used to detect an object or any obstacles within a range or proximity without any physical contact. It plays a huge role in home security applications such as burglar alarm, automated lights and so on. Apart from that they can serve as contact less switch to turn on and off any devices.

Generally an IR sensor mainly consist of an IR diode for producing IR beam and a photo diode or phototransistor to detect them. The IR diode emits infrared light which gets reflected from the surface of an object in IR beams path. The reflected beam will be captured by the Photodiode or Phototransistor. In this way the sensor senses whether there is any object present within its range. Moreover the infrared light is invisible to human eyes which makes it more appropriate for such applications.

You can make your own IR proximity sensor using an Op-Amp as comparator and  IR sensor made of IR emitter and receiver. Here in this circuit we have used a IR sensor module called QRE1113. It comes in an enclosed package making the more accurate. We will also use LM358 operational amplifier (Op-Amp) as a comparator. 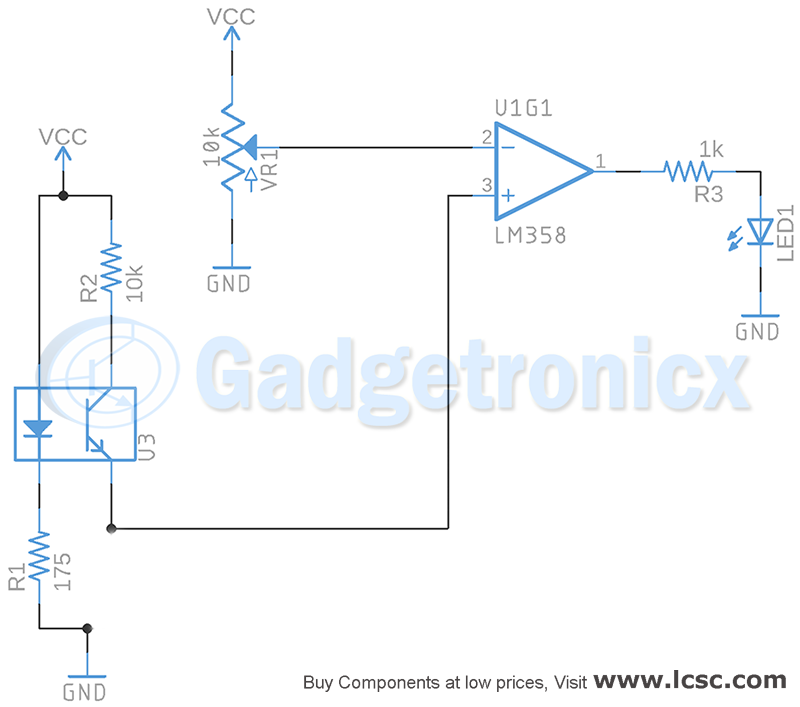 When any object comes in the path to the IR beam, it gets reflected. The reflected Infrared beam will hit the base of the phototransistor. The photons from striking beam activate the transistor, current from collector flows through the base and to the emitter of Phototransistor. Now the non-inverting input of comparator will be higher than the inverting input. So the output of the Opamp becomes high and it triggers the alarm in our case LED. And when there’s no object present the non inverting input becomes low therefore the output is also becomes low. We can also adjust the sensitivity of the comparator by varying the reference voltage with the help of the potentiometer VR1.