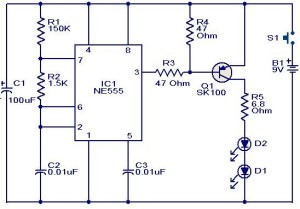 This Infrared transmitter circuit was a simple low power IR transmitter and it can be used for many of the remote control applications.As we see many of the remote controllers uses IR waves for their controlling purpose.This circuit is capable of transmitting IR waves even up to a distance of ten meters with a frequency of 1kHz and the frequency  can be changed based on your requirements.

This circuit is based on the Timer IC NE555 (IC1) which wires as an Astable multivibrator giving constant pulses as output.The output of the IC1 can be controlled by means of Resistors R1,R2 and Capacitors C2.The value of these three components decides the output frequency of the IC1 so the value of these components can be changed inorder to obtain desired output frequency.

The output from the IC1 was given to the base of the Transistor Q1 which serves the purpose of amplifying the obtained output signal from the IC1.The LED’s D1 & D2 was used here as a IR source which was connected to the emitter terminal of the Transistor Q1.When the signal from IC1 passes through the Q1, it switches the Transistor ON and thus it energize both the LED’s to emit IR waves.The waves emitted by the LED’s will have frequency of around 1kHz and can be used for wide variety of remote controller applications.


JLCPCB - Only $2 for PCB Prototype (Any Color)