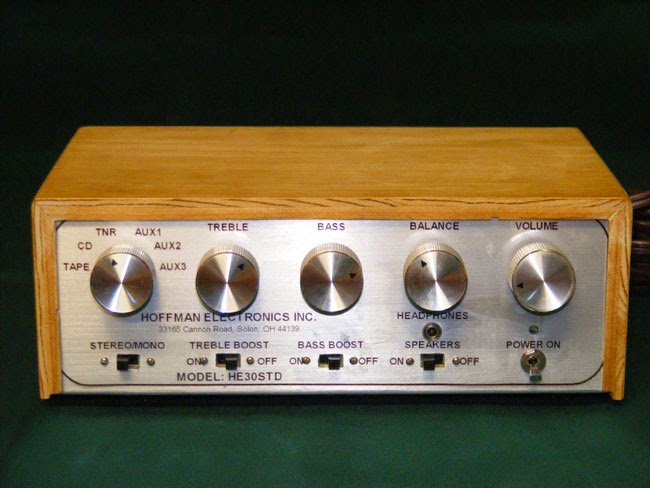 Stereo Amplifiers are quite handy in places where we need to amplify the input signals to make it audible for all. Whether it is for a party, a meeting, or just to listen to full Hi-Fidelity, this amplifier will do a perfect job. This Stereo amplifier circuit is easy to build and will provide amazing audio power and extremely low total harmonic distortion. It is much cleaner than anything I have seen on the market using standard audio IC’s. 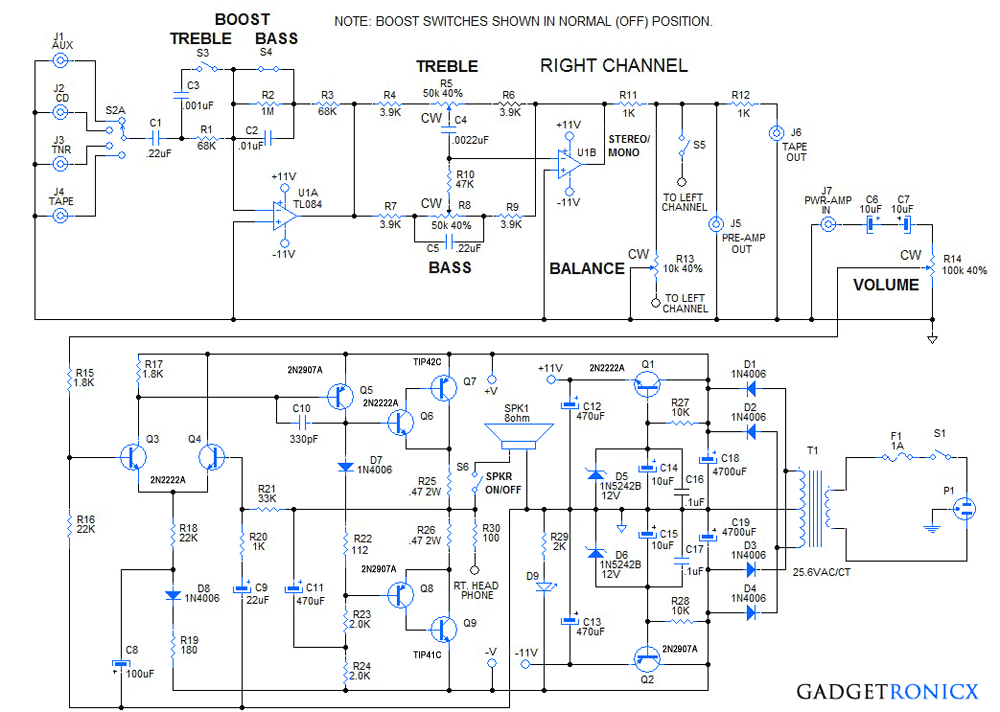 The pre-amp section uses two op-amps, U1A and U1B to provide treble and bass boost at low volumes and treble and bass controls for tailoring the sound to the user’s preference. Selector switch S2A is a 2P4T, ( 2-pole, 4-throw (position)) rotary type to select from one of four line level inputs, (AUX, CD, TUNER, TAPE). They are coupled to U1A  via C1, R1. Switches S3 and S4 are DPDT (double pole, double throw) slide switches that select for treble and bass boost.

As shown, they are in the OFF (no boost) position. R2 and C2 are shorted out by S4 canceling the bass boost. S1 is open which defeats the treble boost. R1 and R3 form a unity gain invertor/buffer and feed the signal to the treble/bass control network of U1B. If switch S3 is closed, then C3 is in parallel with R1 and boosts the treble gain at a break frequency of 2.34 KHz. If switch S4 is opened, then the feedback loop has an additional gain 16, and a low pass break frequency of 234 Hz.

Resistor R11 connects to J5, the Pre-Amp Output jack and through R12 to J6, the Tape Output jack. Jack J7, is the Power-Amp input jack. A jumper cable must be connected from jacks J5 to J7 to pass the Pre-Amp signal to the Power-Amp. If desired, an effects processor, graphic equalizer or other audio processor can be inserted in the signal chain between jacks, J5 and J7, to further enhance the signal. Switch S5, when closed, combines the Right and Left channels for Mono operation. This is useful for a single channel mic input, or mono input, to enable sound to come out of both speakers, (Right and Left).

The Power-Amp circuit amplifies the line level signal at jack, J7, to power the 8-ohm Speaker. The signal is passed through C6, C7, which are wired to form a 5 uF non-polar capacitor, to the volume control, R14. The wiper of R14 passes the desired signal level through R15 to the positive input, (base of Q3), of the power op-amp stage.

Q3 and Q4 form the differential input pair of the power op-amp. D8, C8, R18, and R19 isolate the negative voltage rail and act as a current source to transistors, Q3, Q4. Transistor Q5, performs as a level shifter to drive the quasi-complimentary, cascode output pairs formed by transistors Q6, Q7 and transistors Q8, Q9 respectively. Diode D7 and R22 provide the correct bias voltage separation to provide about 10 to 20 mA of idle current through the output stage transistors and resistors R25, R26. This ensures that there is no cross-over distortion in the output signal, because the cascode output transistor pairs are actively conducting at the crossover transition.

Capacitor, C11 and resistors, R23, R24, form a bootstrap bias network that provides the negative bias to cascode transistor pair Q8, Q9, during the negative half cycle of the signal waveform. The Power-Amp stage gain is set by R21, R20 and C9. Except for frequencies lower than 8 Hz, C9 can be ignored in the GAIN equation.

Thus a .5 volt peak input voltage will yield a 17 volt output peak voltage which is ideal for the +/- 18 VDC supply. Transistors Q1, Q2 are connected as emitter follower voltage regulators to supply +/- 11 volts to the TL084 pre-amp IC.

LED D9 and current limiting resistor R29 indicate when the stereo is ON. The main power supply consists of transformer T1, 25.6 VAC, center-tapped, at 2 to 4 Amps. D1 – D4 form a full-wave bridge rectifier which is filtered by capacitors, C18, C19. Switch S6, Enables or Disables the speakers. Resistor R30 reduces the output before it is connected to the stereo headphone output jack (not shown).

Sorry for ask again, transistors must be match paired? I am in the electronic shop
… Thank.

Transistors do not need to be matched.

No the transistors do not need to be matched.

HI. I´m newbie in electronics, I am building this amp, it seems to be good for my Leea 812RE (18 watts) vintage speakers. I´m trying to understand the schematic-diagram, and I wonder if R23-R24, that in schem is 2k, in the photo of the pcb seems to be 1k… and I wonder if I´m wrong in my point of view. Sorry for my bad english. And thanks for post this circuit. And… can I add a coil in parallel to a resistor at the output of the amp to offset the capacitive effect of the separating filter to be inserted… Read more »

Hi Victor, R23, R24 are 2K 1/4 watt resistors. They are part of the boot-strap feedback and final stage bias network. Also, the parallel coil is not required because the high damping factor of the amplifier output eliminates any need for compensation. The capacitive effect of the cross-over network will have no effect. Good luck with your build. Hope you enjoy the results as much as I have for the past 23 years! Regards, Ron

Thank you very much Ron!

HI. I´m newbie in electronics, I am building this amp, it seems to be good for my Leea 812RE (18 watts) vintage speakers. I´m trying to understand the schematic-diagram, and I wonder if R23-R24, that in schem is 2k, in the photo of the pcb seems to be 1k… and I wonder if I´m wrong in my point of view. Sorry for my bad english. And thanks for post this circuit. And… can I add a coil in parallel to a resistor at the output of the amp to offset the capacitive effect of the separating filter to be inserted… Read more »