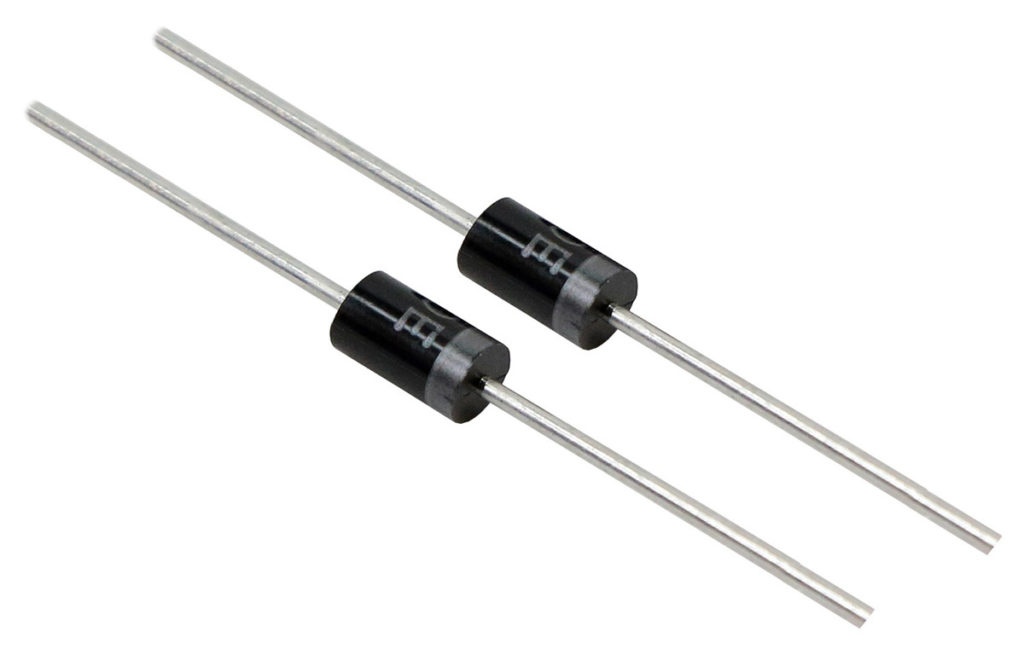 Diodes are often referred to one side valve and can be spotted in almost all electronic circuits. Diode is versatile component which has wide range of applications in areas such as power electronics, signal conditioning, power supplies, protection circuits and so on. In this electronic tutorial I will explain everything about Diode that you need to know.

This is Part 1 of Diode tutorial which answers your questions like “What is a diode?“, “How it is constructed?“ and “How it works?“ . Part 2 of this Diode tutorial will deal with its “Applications and how to use them in circuits“.

You can navigate to your preferred section of this tutorial using the below links.

WHAT IS A DIODE:

Diode is a semiconductor device which has a peculiar property of allowing current when it flows from one direction and blocks them if the direction of current is reversed.

This is the symbol of a PN junction diode or commonly known as Diode where it has two terminals. Positive one which is known as Anode and Negative one which is known as Cathode. Here diode conducts current through it when its Anode terminal connects to positive terminal and Cathode to Negative terminal of a power supply. This condition is said to be forward bias of a diode and current flows through the diode freely.

When Anode of a diode connects to Negative terminal of a power supply and Cathode connects to positive terminal of a power supply. In this state current will not flow through the diode. This is said to be reverse bias of a diode and in this state diode exhibits infinite resistance blocking current flow through it. Although in practical life there will be very less current flows through the diode and it is defined as leakage current which is often deemed negligible.

This Electrons and Holes in the junction/ depletion region serves as a barrier for further ion movement. Also this indicates that free moving holes and electrons in that region is depleted. This leads to the name of depletion region. This depletion region as you see has positive and negative charges close to each other. This develops a potential of about 0.7v for silicon diodes across the depletion region. 0.3v in case of Germanium diodes. 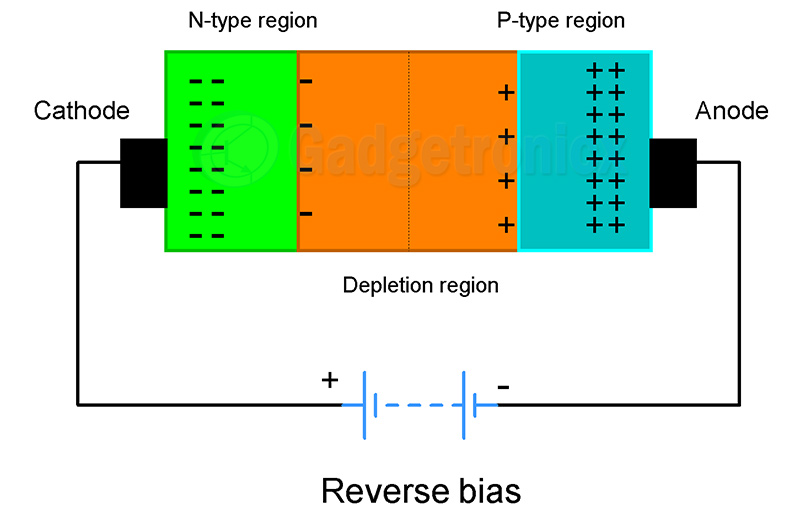 So what makes this depletion region blocks current when reverse biased ? When a diode is reverse biased P-type material will be connected to Negative terminal and N-type region to positive terminal of power supply. As a result negative terminal attracts all the positive ions in P-type region close to it and Positive terminal attracts more negative ions in N-type region close to it. This results in further growth of existing depletion layer/ barrier in the junction thus blocking the flow of current completely. There comes a point when increase in reverse voltage will cause the barrier to break leading flow of current making irreversible damage to the diode. Thus by this means diode construction paves way for current flow only in forward biased condition. 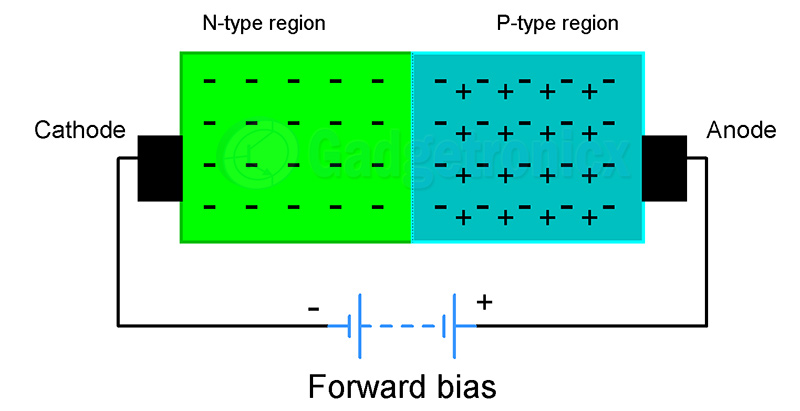 Like explained above bias voltage must exceed barrier potential of depletion region ( 0.7v for Silicon diodes and 0.3v for Germanium diodes ) in order for current to pass through. This is referred as Forward voltage of diode. Sometimes it is also referred as Voltage drop of a diode since 9v forward bias across a diode will be 8.3v in it’s output dropping 0.7v.

VI CHARACTERISTICS OF A DIODE:

It’s important to understand how voltage and current acts in a Diode. The below graph explains the relationship between voltage and current in a Diode. The right side of the graph shows the Forward bias condition ( Anode terminal is applied with more positive voltage than Cathode terminal) . Whereas in Reverse bias, this condition Cathode is more positive comparing to Anode. 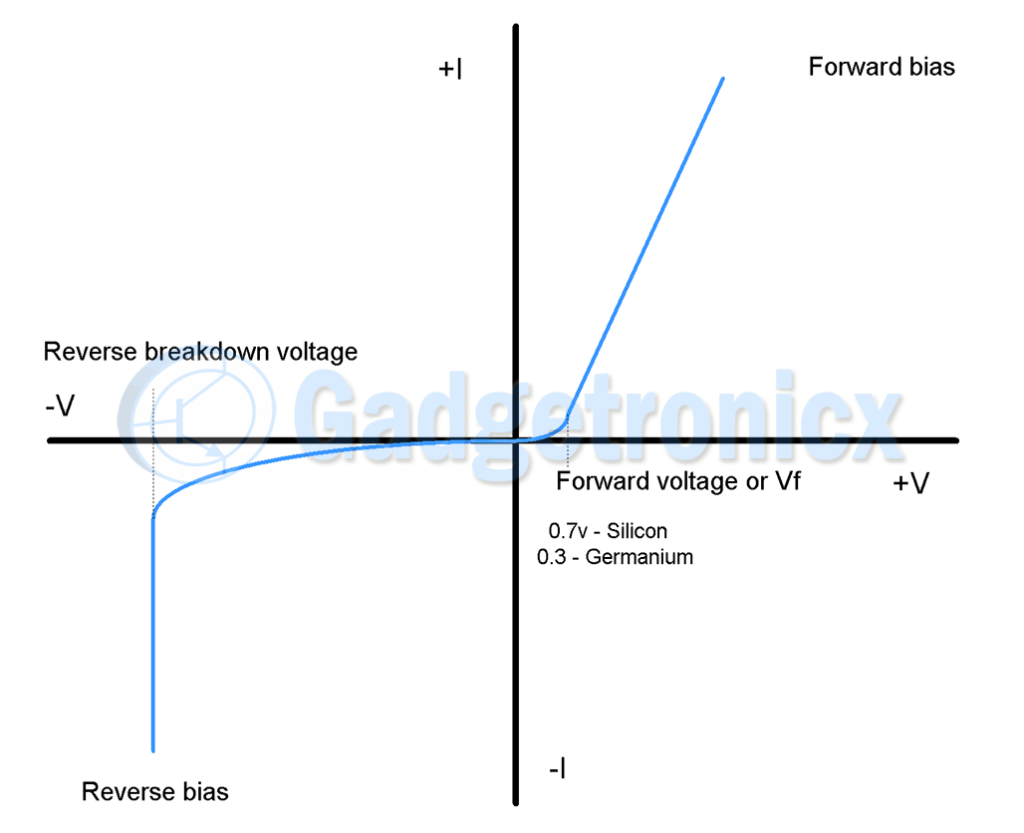 When a diode is reverse biased no current flows through it until reverse voltage stays zero. When reverse voltage increases a very small current known as reverse leakage current starts flowing through the diode. This current is usually in the range of 0.000000001A or 1nA current has no notable effects in a circuit and therefore deemed insignificant. This is the reason Diode is claimed to be blocking the current totally in reverse bias condition.

Here is a short summary about Diode that will offer a quick refresh of what you have learnt above. Referring to below summary will be most effective if you would have gone through the above contents at least once.

This concludes the Part I of Diode tutorial. Hope this tutorial gave you a fair understanding of the science behind working of diode and how voltage and current acts in a diode. Part II of this diode tutorial deals with “Guide to use diodes and Applications of it“

Diode: How to use and its Applications

This tutorial is part of our “Electronic components tutorial series” that we have been publishing in our website. Here is other tutorial that will be helpful to you.