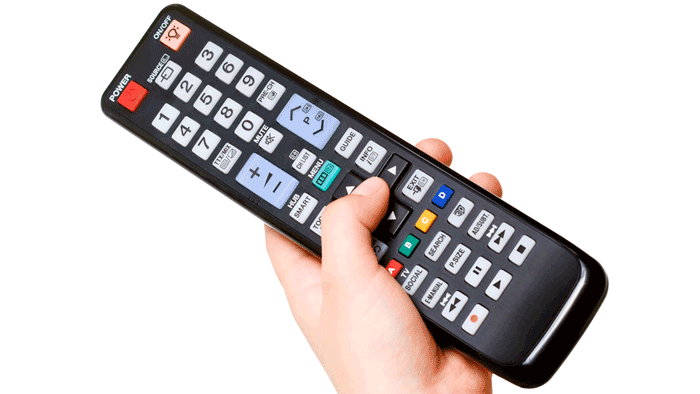 Remote control of home appliances has been a common thing as we use appliances such as TV, Air Conditioner etc in our daily life. This electronic project intended to demonstrate a simple concept of remotely controlling the switch ON and switch OFF operation of the AC mains operated electrical appliances.  This project uses Infra Red to establish communication between the remote and the electrical appliance intended to be switched. This project comprises of two parts a transmitter and receiver which makes the control of home appliances possible. 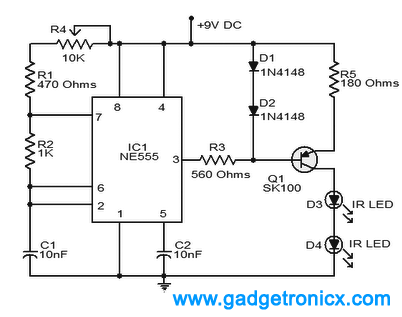 The transmitter circuit is nothing but an astable Multivibrator circuit built around timer IC 555 which produces a continuous square wave pulses. The output of the NE555 is amplified using a PNP transistor transistor to drive the IR LED’s to emit the IR beam. The output timer feeds the IR LED’s used here is same as the one typically used in TV remotes which are easily available and also costs low The circuit operates from 9v battery which can be connected to the circuit through switch SW1.

The input part of the circuit comprising of photodiode PD1, Darlington Connection made with transistors Q1 and Q2 and resistor R2 constitute the current to voltage converter which converts the photocurrent generated by the photodiode into an equivalent voltage in fact the photodiode and darlington connection together make a photo-darlington.The darlington connection amplifies the photo current generated by the photodiode thus allowing even a feeble IR power to be detected. The equivalent photo voltage appears across R1 and So across R1 we get a replica of what we produce at timer IC output in terms of wave shape but not in amplitude would vary with distance and other factors such as angle of arrival of the IR beam at the sensor and so on.

The output of the window comparator feeds the clock input of the J-K flip flop which is wired as a toggle flip flop. The output of a toggle flip flop toggles i.e goes to High state if initially in LOW state and to low state if initially high, every time it is clocked. Output of flip flop feeds the transistor Q4 base terminal. Q4 is wired as switch relay coil as its collector load. The relay operates and its normally open contact closes every time the transistor is switched ON.

Mr Donald,How to interface With microcontrolers and have separate output per each button?

You might need an encoder at the button input. Then decode it in the receiver end using the Microcontroller. That’s one option you can try it out

Thanks…Try this ,its sure you will love it