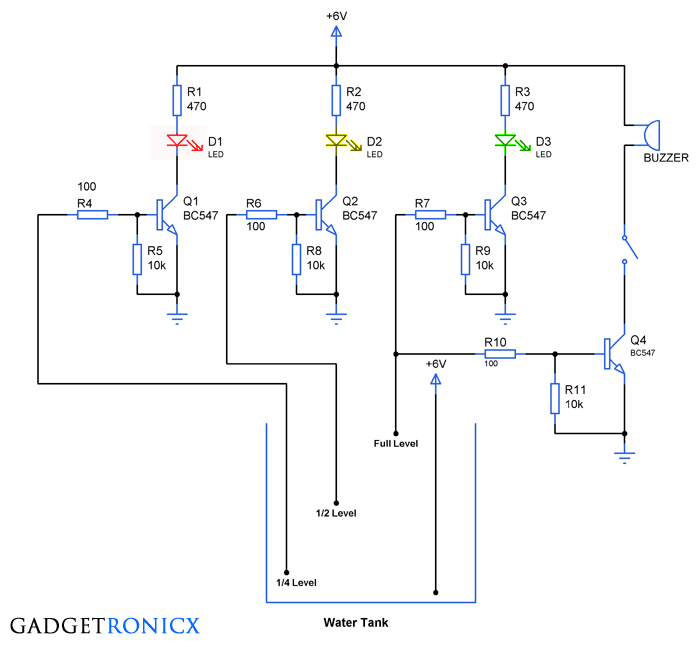 Wastage of water is really an issue in places where they use overhead tanks. Monitoring of water level is really a difficult task in those places and it could also lead to wastage of water and power. The above circuit shows a simple water level indicator system based on Tranistors and LED’s. This circuit could give a simple and cost effective solution for this problem. This circuit was  a simplified version of “Water level indicator” published in Instructables by Raikut.

The circuit schematic comprises of totally two parts. Indicator section for indicating the water level present in the tank and Alarm section for alerting the people to turn off the pump once the tank is completely filled. The LED’s are used for indicating the level whereas the transitors are used as a switching devices. A simple buzzer was used to sound provide the overflow warning. This circuit works based on the conductive property of the water.

The positive line of 6V is inserted into the tank, when there is no water in the tank all the three transistors will be in off state. When the water pump is turned on water starts filling the tank, when the water reaches the 1/4 level of the tank it comes in contact with the 1/4th level wire which is connected to the base of the transistor Q1. The water will provide a path for the current to flow from supply to the base of the terminal. This turns the tranistor Q1 in turn Red LED D1 which indicates that 1/4th level of tank is filled with water.

The switch given was used to turn off the alarm after the person is alerted. But do remember to turn the switch on before turning the Pump on or else the alarm won’t work. For advanced version of this circuit refer to this article “Water Level Indicator Circuit with Alarm on Instructables”.

what is the function of that 100ohm resistor to the base

It will limit the base current to turn the transistor ON. I suggest you to use the value shown in the diagram

What is the purpose of the 10k resistor connected across base-emitter of each transistor?
To increase input resistance? What will happen if I don’t use it?

Hi Tejas,
It’s called as pull down resistor. It’s function is to feed voltage 0 to base of transistor whenever there is no voltage input from the wire dipped in water tank.

Got it! Thank you!

What about corrosion in the electrodes? They won’t last four so long.

That will be a great concern in this system am not gonna deny that. But cost wise this could give a good solution for the water wastage. We will try to post better Water level sensing circuits and keep you updated. Thank you, keep visiting.

The system has a pressure sensor, a quad op-amp indicator LED’s, reference pots, and eleven resistors. An audible alarm can be added with a resistor, transistor and audible buzzer. The advantage is that this system will work in any kind of liquid and has no contact with the liquid. A tube connected to the pressure sensor, runs from the top of the tank to the bottom of the tank. As the liquid level rises, the pressure in the tube increases. The two op-amp differential input stage, amplifies the pressure sensor input. The other two op-amps compare the sensor voltage to… Read more »

Great idea Ron, you are the best. When i find this circuit i thought this could do a good job with minimal cost but your idea will do a lot better job than this one.

The only problem with this kind of level detector is: 1. the fluid must be ionic to conduct current. If the fluid is an oil or an an-ionic liquid, this circuit won’t work. 2. the DC current will cause the sense electrodes to de-plate and eventually disappear which will cause failure. using AC is the correct way to avoid deplating. 3. This design requires a separate electrode for each level detected. There is a much better way to do this using a pressure sensor and a quad op-amp to measure the depth. If anyone is interested, I will provide a… Read more »

We are definitely interested. Adding pressure sensor will make the system complex won’t it???

not necesarilly, depending on the sensor, and you can always add comparators (schmit trigger like) to turn on/off the leds