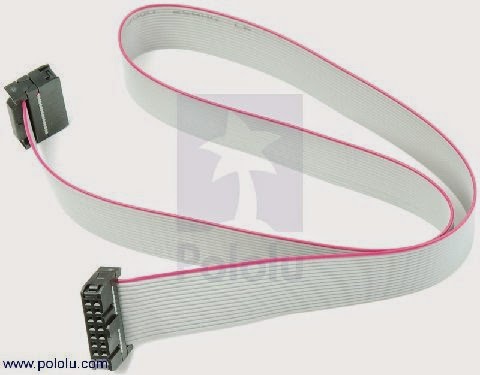 IDC ribbon cable tester circuit is designed to check IDC (Insulation Displacement Connection) cables quickly for shorts to adjacent pins or opens from one end to the other. Originally, I designed this unit to test ribbon cables used on test equipment in the automotive industry. But it works for any ribbon cable. There are multiple types of sockets used with ribbon cables. 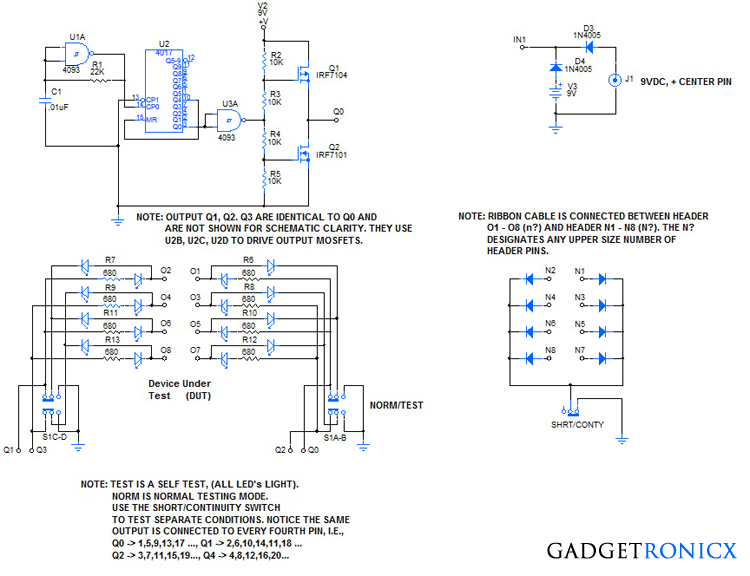 The most common are dual row headers (both male and female) and “D” type connectors (both male and female). If you build the tester and include two sets of 40-pin dual row headers (M&F) and “D” type (M&F) for the “O” port, and the “N” port, you should be able to test most types of ribbon cables. There are “.1” and “2” mm spacings too. Wire the four “O” headers and “D” ‘s in parallel and the “N” headers and “D” ‘s in parallel. This will allow the user to test male to female, male to male, female to female and female to male cables all on the same unit.

The heart of the Ribbon Cable Tester is the clock, U1A, (CD4093 schmitt NAND), R8, C1, they feed the clock pulses to the CP0 input of the U2 (CD4017 sequential decade counter). The outputs of U2 turn ON individually and sequentially with each rising edge clock pulse. After the fourth clock pulse, Q3 of U2, turns OFF, and Q4 turns ON. This resets U2 causing Q0 to turn ON, to continue the four step pattern. When U2, Q0 is (high, 1), the output of U3A is (low, 0), which turns transistor Q2 OFF and Q1 ON and makes output Q0 = (high, 1).

When output Q0 is (high, 1), current is able to flow through R6, and the LED to O1. When the Short/Continuity switch is in the continuity position, the O1 green LED will light if the path from O1 to N1 is correct. This applies for all of the corresponding On to Nn connections. When the Short/Continuity switch is in the short position, no LED’s will light unless there is a short to an adjacent wire, such as wire O1 to O2, or O3 to O4 etc.

The Normal/Test switch allows the user to test the unit to make sure everything is working properly. When the switch is in the Test position, all of the LED’s light to show that the clock, counter, buffers and wiring is in good shape. In the Normal position, the unit is ready for testing ribbon cables for continuity and shorts. This is a really good device if you have a number of ribbon cables that need testing.