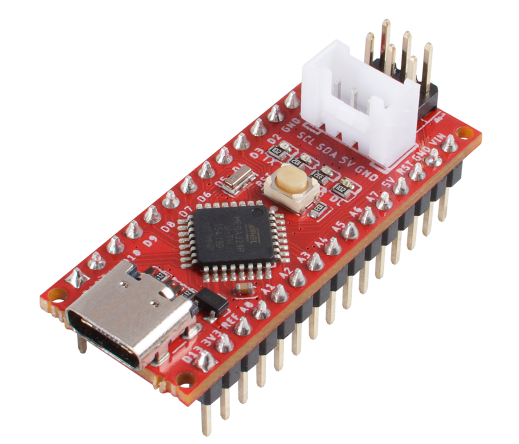 Advancement in Development boards has opened up a whole new oppurtunity to learn, explore, build cool things. It has given rise to many hobbyists and enthusiasts to play with Electronics. Arduino has been an integral part of astronomical raise of development boards. In addition to Arduino there are many companies have developed their own version of development boards with each of them bringing something unique to the tinkerers like me. Recently I have tried out my hand on Seeeduino Nano development board and thought to write few words about it.

Adapted from the famous Arduino nano this board is best definition of best things in a small package. This board measures about 43mm X 18 mm and can fit into bread boards and greatly suited for portable projects. Interestingly Seeeduino Nano costs less than half of what Arduino Nano cost. This development board is built around powerful 8-bit microcontroller ATmega328P. Seeeduino has made few upgrades from Arduino Nano

I have tested my board with a Serial communication code that is available in the IDE itself. It worked just good as Arduino nano I have used in the past.

First things first, the board comes with a impressive build quality and speaks for Seeeduino standards itself. USB type C connector is a great time saver for me, it’s usual routine for me to meddling and flipping sides of USB cable to get the connection right in Arduino Nano. But USB type C allows me to connect the board without all the meddling. I have enough Digital IO pins, Analog inputs, PWM to run a cool project and the fact that it takes only small space in the board or in your project makes it even more convenient to use.  This board also includes I2C connector which can be used for quick interface to connect with I2C enabled modules like LCD, Sensor,Display and so. This is probably the huge advantage this board holds over Arduino Nano and edges over it since this comes in half the price point comparing to Arduino Nano.

On the whole for tinkerers like me this board is a great add on to their inventory and can considerably play a great role in your next wearable or smart home projects and so.