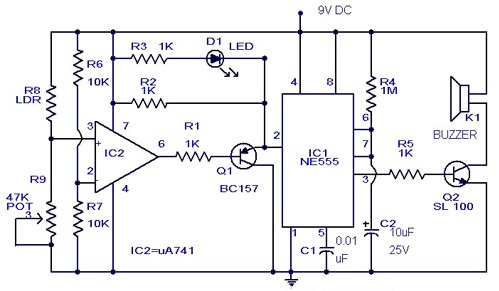 This is a ultra sensitive intruder alarm circuit diagram. Here the shadow of the intruder passing through few meters nearby can trigger this circuit to produce an alarm.Here the job is performed by means of a LDR(Light Dependent Resistor).Thus this circuit was set up in such a way so that Op-amp was made to trigger the NE 555 to produce a series of clock pulse waveform which was wired in means of monostable Multivibrator mode.Now let us see the operation of this simple Intruder alarm circuit.

Initially the Comparator used here was connected by means of non inverting mode.The set point of this Comparator was is by means of R6&R7.The voltage divide by LDR and R9 was given at the non-inverting pin of the IC2.At standby mode these two voltages are set equal by adjusting R9.The output of the comparator will be high during this time  so Transistor Q1 will be off therefore the voltage trigger given to the IC555 will be positive and there will be no alarm.

When an Intruder passes through that way the intruders shadow will make cause the resistance of the LDR to increase.Now the voltages given at the input of both the terminal will be different in this comparator the difference between the voltages will be amplified since the increase in resistance will make the output of the comparator to go to the negative saturation giving low output.This makes the Q1 on.Therefore it lets a negative going pulse trigger to the Monostable multivibrator.This makes the IC555 to produce continuous square wave forms and it was then amplified by the transistor Q2 to produce the alarm sound.This circuit will be very funny and easy to implement enjoy doing it.

hello, excellent project, my question is: what is the time of respiesta that has the timer so that the buzzer works