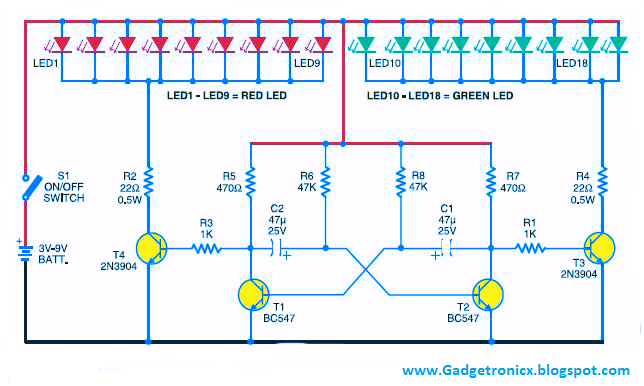 LED circuits always play an important role in daily life applications in many ways.It attracts Electronic hobbyist interest since it was easy, simple to implement and cost effective too.This was a simple LED christmas lights using Transistor in astable mode.Lets move into the explanation part of working of this circuit.

The above circuit uses the simple logic of alternate switching of the two transistors to make an attractive pattern of lighting.That is when the Transistor T1 is conducting that is giving high output transistor T2 will be in OFF state.And Transistor T1 will be OFF if T2 was conducting.The output obtained from the astable multivibrator was fed into the Driver transistors T3 and T4 which was used in order to drive the number of LEDs connected to its respective terminals.

Thus the Green and Red LEDs will switch alternatively at equal time period producing a Christmas Lighting effect.The frequency of the output square wave produced from the Collector terminals pf the Transistor purely depends on Resistor and capacitor values R6-C2 for Transistor T1 and R8-C1 for Transistor T2.The driver transistors acts as a switch, thus switching the LEDs ON whenever high signal was obtained at the base of the Transistor T4 and T3.The brightness of the LED’s can be adjusted by varying the R2 and R4 Resistor values.And the frequency of the switching can also be varied by changing the capacitor values C1 and C2.

Few issues with this circuit- can be tricky operating LEDs in parallel like this. If they are not perfectly matched the current will crowd through one diode and they will be unevenly let. Maybe that’s a feature? Also, there are much better oscillators using fewer parts and smaller capacitors. I also suggest picking a few favorite MOSFETs. 2N7002, BSS84, BSS138 to name a few. Perhaps you gravitate back to the 2N3904, etc… because they are leaded? BJT’s do not make good switches- please consider using MOSFETs. They require fewer parts and are easier to drive in such applications.