IOT has been all around us for quite some time now and it has almost revolutionized the way machines communicate among themselves. As a starting point here is a simple project tutorial on creating Arduino web server that will help you to open the doors to IOT. In this tutorial we are going to host a simple web server as shown in the above image.

Remember you can host a webpage in your ESP8266 but the controlling functionality is pretty less in it. Given that there are only two GPIO pins in it. Also it doesn’t have of PWM, timer and other options. ESP866 serves as a communicating medium which enables Arduino to join a LAN. We can use our WiFi enabled mobile phones/ laptops to form a LAN with Arduino. From our devices we will access the Arduino web server, fetch the webpage from it and control the modules or components connected to it. I have made a video explaining this entire tutorial – please do check that out

I presume most of us are familiar about ESP8266 chip. For those who are not aware of it, ESP8266 is a versatile low cost WiFi chip that is capable of providing WiFi connectivity to your embedded projects. It can work in both Station and AP mode which makes it a perfect choice for IOT projects. Apart from this it also has two GPIO pins which can do some basic turning ON/OFF.

In this project the whole purpose of ESP8266 is to provide a WiFi link between Arduino and our mobile device. We are creating a Local Area Network (LAN) by using ESP8266 as Station and connect it to Mobile/ Laptop (WiFi enabled devices) which serves as AP/Hotspot. Any devices connected to this AP will be within this LAN ( i.e ESP8266 + Arduino and Mobile devices ). Therefore they can communicate with each other and access the Arduino web server. In order to do all this we should program Arduino to feed a specific set of AT commands to ESP8266.

Predefined AT commands will decide all the parameters of WiFi link in ESP module. Using this we can control the way ESP8266 make or release the connection with other WiFi devices. This includes Setting AP password, Joining AP’s, Creating server and so on.  Refer this link for “Complete AT command list” used in ESP8266

To keep this simple, for majority of commands ESP8266 will respond with given Input command followed by the characters “OK\r\n”. For example if we send the command AT then the ESP response will be

This is common response for most of the commands. There are also other response codes that we would need to monitor for this project, which will be discussed later in this article. 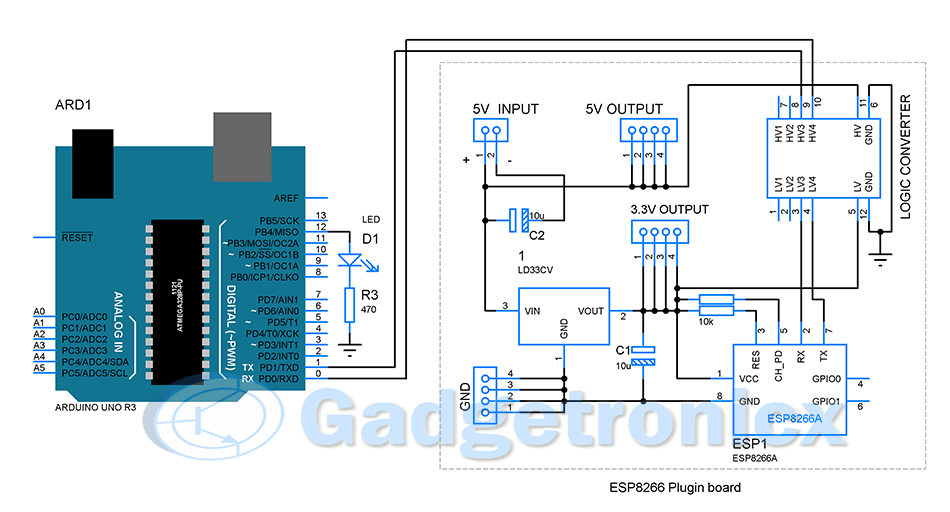 From the above schematic diagram, you can see that Arduino is connected to a Bidirectional Logic converter LG1 which basically converts the logic from 5v to 3.3v and vice versa. This is to help both Arduino and ESP module to identify the logic 0 and 1 in order to communicate with each other via UART. Apart from that the schematic diagram is pretty straight forward. The headers in the Plug-in board section is for providing easier connectivity for ESP8266 when using it with Arduino or any other developmental boards.

I strongly recommend this step since ESP8266 can be buggy and it’s quite necessary to have this tested. Upload the bare minimum code to the Arduino and connect the ESP8266 as shown in the schematic. Once done use the following commands, but remember to select “Both NL & CR” & Baud rate as 56700 which is default baud rate used by ESP module.

The above command will make your ESP8266 to join the network you wish and it will remember the AP even after powered down. This is important in terms of this project because the code is developed in an assumption that ESP8266 was already connected to AP or hot spot of mobile device which we will use. This is because connecting to AP through the code seems to make things complex with no considerable benefits to this project.

This command is to alter the baud rate at which the ESP module operate. I had to do this since ESP modules worked better with this baud rate than higher speed.

Arduino web server can be accessed by the devices within that LAN to control the LED’s or other components. ESP8266 will remember the AP’s that it has been connected to previously. It will get connected to AP as soon as hotspot in your device is turned ON. Once connected, a LAN will be created. Once Arduino detects a connection via ESP8266, it will start sending commands to ESP module to create a server. I have added a LED to indicate server creation. Mostly it will take about two seconds from the moment ESP is connected to WiFi AP.

Once the Arduino web server is ready, open any browser in the devices connected to the LAN and access the IP address assigned to ESP8266 module. Arduino will send a piece of HTML code to the client via ESP module and a webpage will be displayed on your device browser. HTML codes from the Arduino were built to display button in the webpage. Using these buttons user can feed input back to Arduino. Based on the received inputs, Arduino will activate/deactivate LED’s or any other devices that are connected to it.

These are the list of commands that we are going to use to create this Arduino web server.

“AT+RST” – Reset the ESP8266 module
“AT” – Response check
“AT+CIPMODE=3” – Set the module as both Station and AP
“AT+CIPMUX=1” – Setting to allow multiple connections
“AT+CIPSTA=<Local IP address>” – Assign any local IP address but make sure it is compatible with your device.
“AT+CIPSERVER=1,80” – Creating server with port 80
“AT+CIPSEND=<connection ID>,<Byte count>

I manually set a static IP to my ESP8266 module even though my mobile DHCP will assign IP when connecting with it. I am doing this to make sure I know the IP address of ESP device and I can connect to it without any problem. Without doing this DHCP in my mobile phone will assign IP address which is currently free and you will not know this while using this. But you should take care when choosing your IP address since local IP address differs from device to device. I have read in a documentation that Android phones are programmed to use 192.168.x.x to assign for the devices connecting with it locally. So I have used the IP 192.168.43.253 to assign for ESP module. So search in internet for the IP your devices will use and add it in the code.

Hi sir. Since it’s not possible to connect multiple users on the same server? What should I use instead of the Esp module?

Hi Koreddi, Am not sure I got the question right. In this tutorial we use ESP merely as a link for Arduino to form a LAN with our Smartphone or other devices. You can code the ESP module to work stand alone but am not sure it can store the code for web page in its memory. Best way is to use Arduino to store both the webpage code and when user request webpage let Arduino serve the first webpage and then take the input process them and insert the output into the second webpage and display them. You need… Read more »

Very nice writeup. Truly helpful. I modified the code so that the ESP is the AP, and also to use Software Serial. I get the client request in Arduino from the browser , but for some reason the webpage is not returned to the client. Should you for some reason read this, I could use a pointer or two to get this resolved. Will post details once you respond. Thanks.

Hi Erich,
Yes, Using ESP as AP will simplify it for better. I might need more details on the problem you are facing for me to help. Kindly post them please