The above you see is a result of my work in which i tried to go Vintage with my design. I was talking about the usage of Vacuum tubes when i mention the word Vintage, am pretty sure you will agree to it as well. This vacuum tube oscillator can be used for testing purposes and uses diodes as an amplitude stabilization and automatic gain control. 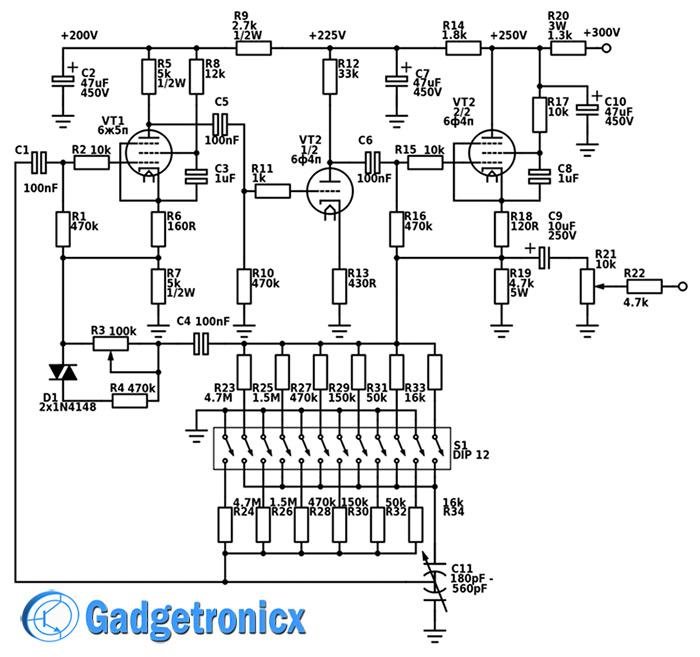 This circuit is more like a version 2 of the oscillator i built earlier, where i used Triodes for first two stages. But it seemed that the input capacitance from grid to anode of the first stage was somewhat high, due to it being a triode and all. And when varying frequency of oscillations it strained the positive feedback and readjustment of the negative feedback was necessary, to bring up the oscillations again. This makes my Version 1 design extremely inconvenient.

To bypass the above problem I just replaced the input triode stage with a pentode, which uses a suppressor grid to suppress the grid to anode capacitance, which caused the loading of the positive feedback. There are still other capacitance remaining, but they`re all in-phase with the input. They will reinforce the input impedance. The only capacitance that matters is the input to anode, because the anode output is 180 degrees out of phase with the input and acts as an unintentional negative feedback. So when the capacitance of the variable capacitor falls down enough, positive feedback can no longer sustain oscillations without readjustment.

The second stage is part of a triode-pentode tube and works as a voltage amplifier. It boosts the input, to replenish the losses in the positive feedback and transfers it to the last stage. There is nothing unusual about it, just a common cathode voltage amplifier.

The last stage is a cathode follower stage or a voltage buffer which acts as a current amplifier. This boosts the current handling capabilities of the oscillator. The feedback are taken from it, so that they wont strain the voltage amplifier. The negative feedback itself contains an automatic gain control circuit, by the use of the two diodes which act as a deliberate delayed negative feedback.  This will activate only when the output rises to a certain level. This way through careful adjustment you can get the gain of the amplifier to be just little over 3 to start the oscillations and when they rise to a certain level gain will fall to exactly 3 and remain there.

The output may also become wobbly due to the low time constant on the bulb. The positive feedback is somewhat complicated, in order to vary the frequency of the oscillations from 50Hz-50kHz. It uses a dip switch and when you want to choose a frequency range, you just enable two consecutive switches. The frequency range table of Vacuum tube oscillator is