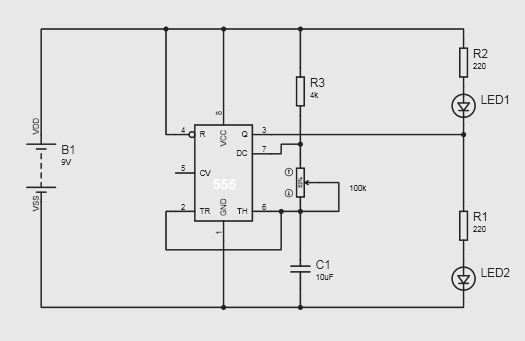 IC 555 was widely used in all sorts of applications such as timer, oscillator and it holds very important position in electronics.The above circuit was designed to use as a alternate switching led circuit and its working was based on the Astable operation of the IC 555.This circuit can be hobby circuit and it will be suitable for minor switching circuits.

The circuit operation was completely based on the astable mode operation of IC 555 and current sinking capability of the IC 555.As you can see that IC 555 was wired as an Astable Multivibrator operation  making it to produce a series of square wave pulses.The duration of the pulses of the output was obtained by means R3,C1 and variable resistor VR1.The variation in these three values influence the timing output of the IC 555.

The square wave output from the pin 3 was used as a source for Led 2 and Sink for Led1 thus making to perform switch operation.Whenever the output from the pin 3 was high the Led1 obtain source current from the IC and switches on.When the pulse was high the Led 1 will not be grounded and hence it remains in off state.When the output pulse goes low the Led1 will be grounded to the Pin 3 of the IC 555.Since IC 555 can sink currents upto 200 mA the Led1 will be switched on for the duration of low pulse output from the IC 555.The resistors should should be avoided in order to prevent the damage of the LED’s.Thus the Alternate switching of the LED’s give a beautiful effect it.